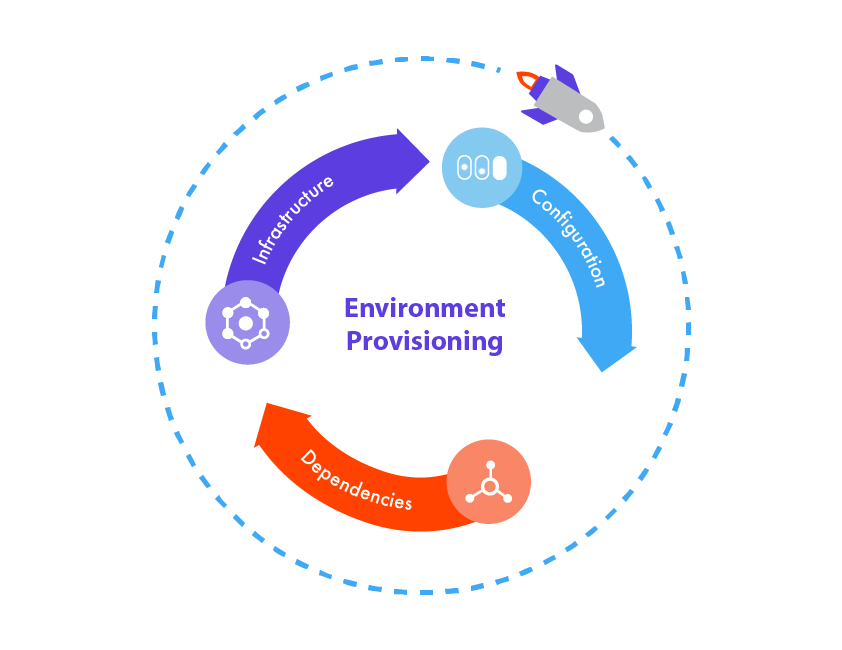 Environment provisioning is a key part of a continuous delivery process. The idea is simple: we should not only build, test and deploy application code, but also the underlying application environment.

What is the “environment”

Infrastructure is the most important element of the environment, as it defines where the application will run, the specific configuration needs and how dependencies need to interact with the application.

Dependencies are all the different modules or systems an application dependes on, from libraries to services or other applications.

What is infrastructure today?

The concept of infrastructure refers to the components, hardware, and software, needed to operate an application service or system. But, as hardware has been abstracted away in favor of scalable, reliable and affordable solutions, the true definition of infrastructure is something different to every application.

And the IT infrastructure is not just vertical, but also horizontal, as platforms can also connect many services pods and execution silos.

How about configuration and dependencies?

For any organization to successfully test and release new applications or application versions, the appropriate environment(s) needs first to be in place. The enterprise follows many different procedures for supplying environments to applications. It may be manual or automated, or a combination of both.

It also may be in the hands of different teams or roles within the enterprise, from developers to operations and sysadmins.

Now why would you want to automate environment provisioning? Or yet, how would you demonstrate that spending time automating and building provisioning into continuous deployment can be beneficial at your organization?

This KPI offers a direct measurement of the end-to-end process for provisioning new infrastructure, including both physical and virtual machines, processing power, storage, databases, middleware, communication and networking infrastructure among others. IT managers and business users can employ this metric as an indication of the degree to which IT is supporting the ability needs of the business.

Measure how to and for how long infrastructure is being used, how fast it’s being delivered and disposed of and what business requirements are behind each request.

Provisioning and disposing of environments following establish patterns and templates help reduce waste and complexity. Modular environments are also easier to debug and scale as changes only impact in one application instead of a cluster of applications. The bottomline is that modular environment reduce the costs of running tests and are easier to throttle in production, which also translate in applications that only consume what they need at a given time.

Here a sample of use cases that triggers an organization to implement a provisioning solution:

If you feel you’re not taking full advantage of environment provisioning, here’s a few ideas for you to get started ASAP:

In general, containers are a great way to go thanks to it’s infrastructure as code nature and natural DevOps fit. Serverless on the other hand can abstract away many environment concerns and make better use of resources as applications grow.

Let Clarive be your best friend in your DevOps journey to continuous delivery. Start with your 30-day trial now.