Now you can keep your rulebook variables private with secret variables. The content is not visible to the user and the data is encrypted to the database.

Variables also now have multiple scopes. Define the scope in the variable and it will only be available for rulebooks that run under the given scope. 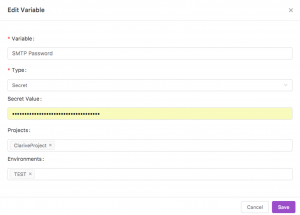 Users can only manage variables for owned projects

Clarive rulebooks can download, install and run shell commands within Docker images with the image: op. Starting with this release, you can manage all Docker images and containers installed and available to rulebooks on the Clarive server.

The Clarive Docker admin panel can manage both instances and containers. A complete list is shown including the current status of each one of the containers.

Using the containers list you can do over them actions like start, stop and delete. You can delete Docker images too to keep your image registry tidy and remove old images.

Other small fixes and enhancements added to the release:

Just follow the standard procedure for installing the new version. Click here to get it from our install page.

Cloud images have been updated automatically in case you are a user of our cloud.

Join us in our Community for suggestions and bug reports.

Thanks to everyone who participated in making this release possible.

The next release, 7.0.12 will come out on the first week of January 2018 with mostly bug fixes and small enhancements.

And a major release, 7.1 is coming up later in January packed with some awesome additions: