The Clarive team is very excited to announce the release of Clarive 6.8. Our new release brings a whole set of features and functionalities that take Lean Application Delivery to a new level

The focus of the 6.8 release series is to improve the quality and intelligence of the delivery pipeline. We’re very committed to solving some of what we consider to be very important issues that impact on the quality and robustness of the DevOps toolchain, namely:

Eradicating errors is not just a tongue twister.

Your delivery pipeline is probably comprised of many different tools, technologies and resources. Even the most robust DevOps chains tend to encounter errors along the way, caused by compiler errors, application server issues or resource failures, like simple disk space errors downstream at endpoints in the network.

Clarive 6.8’s new root-cause analysis feature is a powerful tool to help deal with errors that can bring your pipeline to a standstill. Root-cause analysis helps identify why problems/errors happen when they happen:

For example, in the screenshot below, Clarive interpreted an error, giving guidance to the user that “rebase was needed” (a dependency problem was detected in the Git repository prior to deploying the application):

New root-cause configuration items can be configured to parse errors and give guidance on how to respond to errors. Root causes can be also recorded on-the-fly into the knowledge base for future, automatic matching.

Even the best DevOps automation has bugs. DevOps is about making it easy to deliver changes continuously with quality and speed. But how robust is your DevOps automation? What if you introduce changes to it that break build and deployment applications. DevOps has become part of the final product. You’ve just bankrupted the business!

Clarive 6.8 brings a pipeline static analysis checker that verifies how strong and resilient your automation is before you make changes. It will also make recommendations that help create more mature and safer logic: 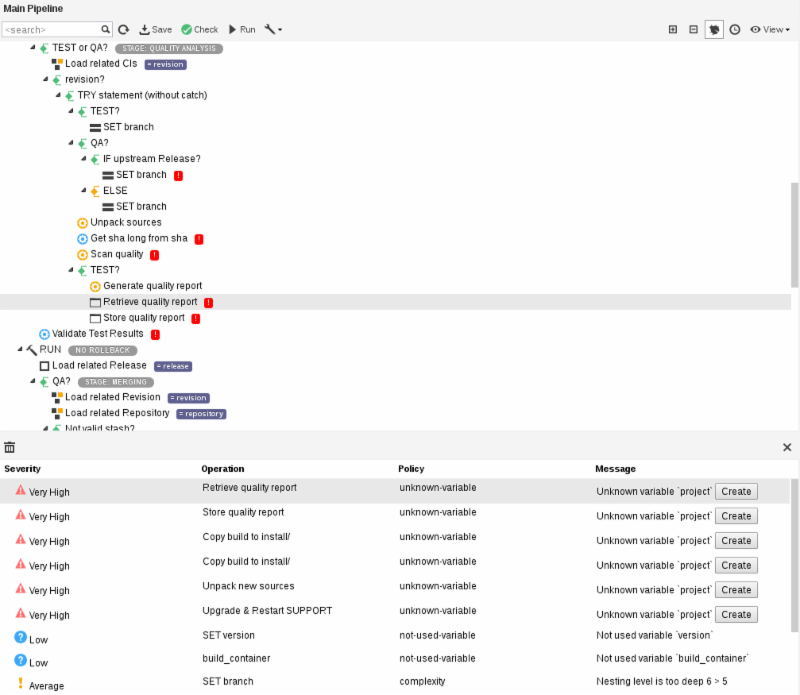 The static analysis of Clarive rules can be executed from the command-line every time a rule is saved. You can even prevent the rule from being saved if it has errors, helping making the whole system even more secure.

Create pipeline stages and profile them by stage and operation type:

The stage visualizations can now be seen in the job monitor live. Clarive 6.8 stores historical profiling data so that you can profile the evolution, and prevent and detect bottlenecks ahead of time.

The new step-by-step debugger is one of the best new features coming out in the 6.8 series.

In this version you can watch how the deployment runs step-by-step, with live logs and standard error and output from endpoints, external integrated and orchestrated applications, databases, etc. All the scripts and rule logic executed externally, will be controlled from a single entry point – the Clarive DevOps platform.

Some of the key features of step-by-step debugging coming out in the 6.8 release series:

There many more, over one hundred, enhancements in Clarive 6.8. Here are some of them:

There are many new plugins that will be covered in another series of posts, so stay tuned. But here are some new important additions and complete makeovers:

Clarive feature releases come out every month. The next release will bring important improvements in many areas, including:

And finally, a revamp of our UI that includes an improved and more fluid user experience.

There are many more exciting features coming out this year, so please watch this space!