The foundation of the configuration managed by Clarive for its delivery pipelines and changesets are stored in its powerful Configuration Database.

Environments and their resources are managed in the Clarive Configuration Database as graphs. Each resource is defined as a Configuration Item (CI). Configuration items belong to Classes (ie. TomcatInstance or a OracleDB classes), and each class may belong to one or more families, such as Database or Middleware families.

CIs can be connected to one another through relationships. For instance, an application may depend on a certain DB CI instance when deploying, so there exists a relationship between both.

Here are a sample list of possible relationships among CIs:

Relationships are created by associating one entity with another, ie. adding a changeset to a release. Clarive also curates the relationships and removes them if one of the CIs is deleted or deprecated.

Relationships may be visualized with any one of the CI Graph representations. These representations may be opened on the fly as properties of a CI (or Topic). 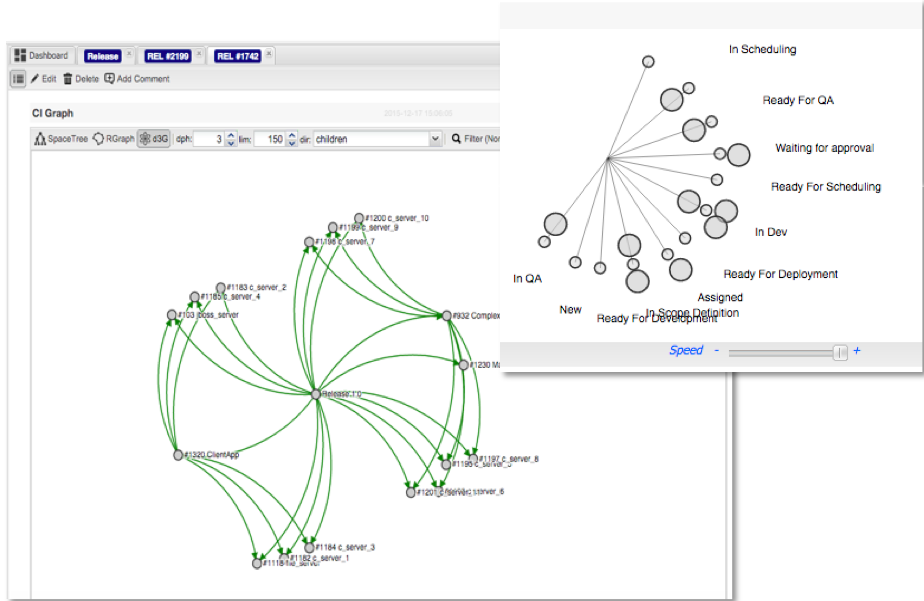 Graphical visualization of the relationship between CIs in Clarive

Any Clarive Project, which is used to represent applications and services in a organization, can be modeled from available configuration templates using the project configuration editor:

Application models are stored in the Clarive graph database and can then be displayed using the same CI visualizations mentioned above.